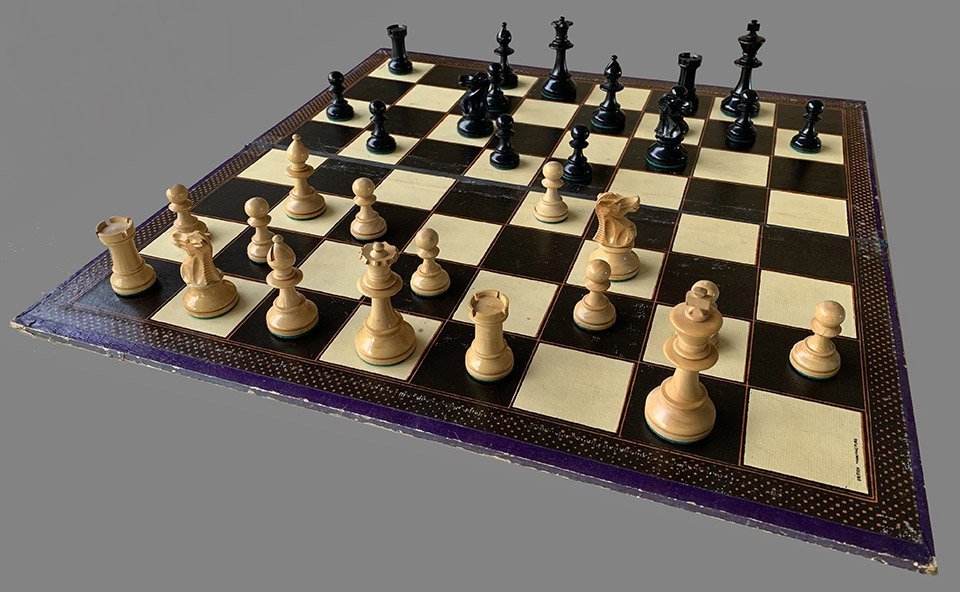 Offered here is a set of French Lardy Library Chessmen, Natural and Black Lacquered, weighted and felted, with a 2-7/8″ King having a 1-1/8″ diameter base. The chessmen are in excellent condition. A somewhat worn folding cardboard Chad Valley chessboard with 1-7/8″ Black and Buff squares is included. Circa 1950.

Lardy was a French chess set manufacturer, founded in 1890 in Dortan near Oyonnax in the French Jura, which closed shop in 1992. In the Post World War II eara, Lardy exported very large numbers of chess sets to the major market USA and England. within a decade or so, cheap knock-offs of the Lardy chessmen were flooding the English and American markets. Although not of the same quality as the originals, buyers flocked to purchase these cheaply made, although economically-priced chess sets in large quantities. The glut of these inexpensive knock-offs using cheap Indian labor eventually forced Lardy to close their doors in 1992.

Lardy was not the only French manufacturer to offer decent quality chess sets at a reasonable price.  Makers like Chavet and Drueke also tried to infiltrate this lucrative market for mid-range chessmen. For more information of the Lardy Chessmen, visit http://www.chess-museum.com/lardy.html for an interesting historical overview.