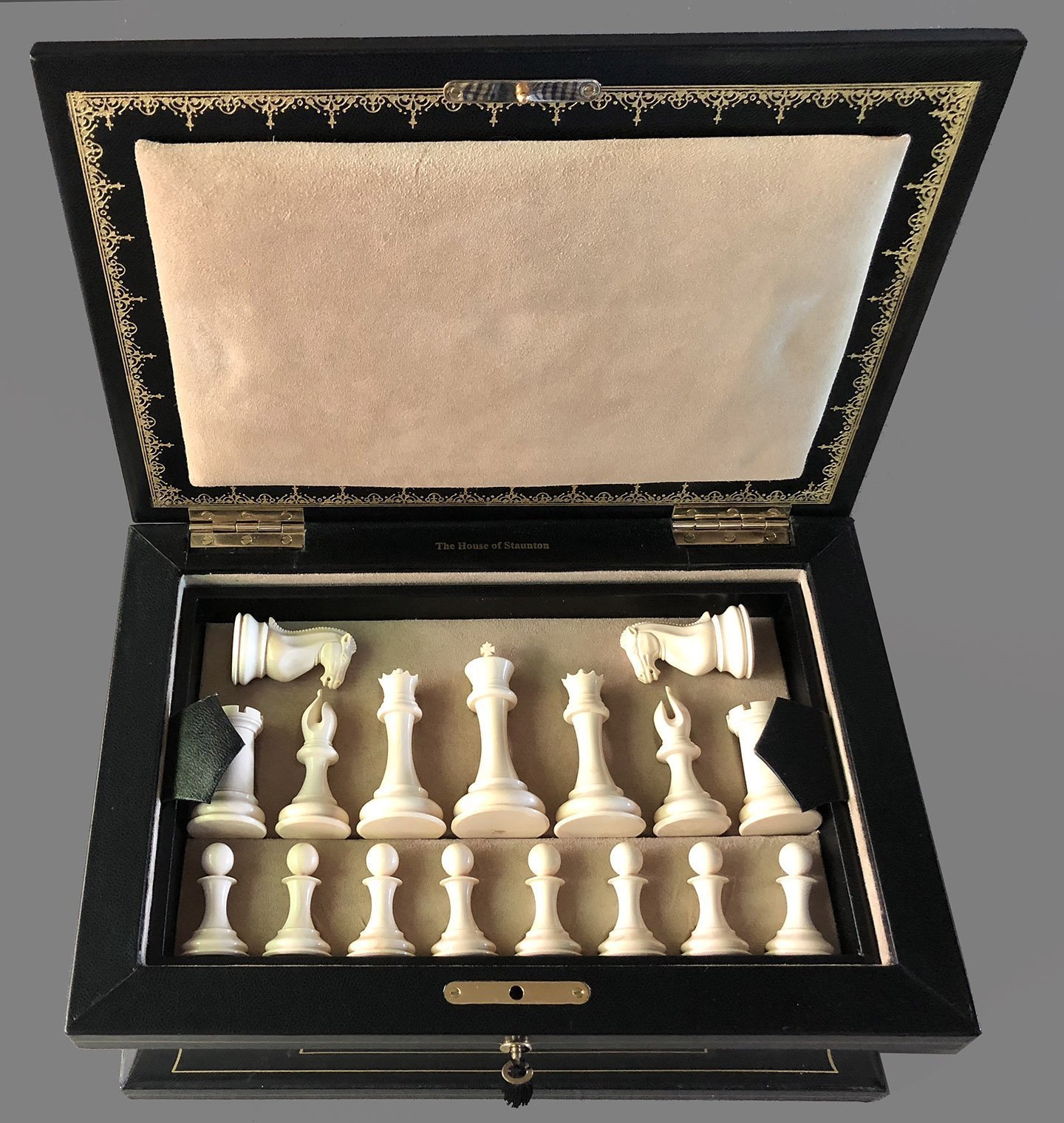 This reproduction is the second set of 1849 style Mammoth Staunton Chessmen, recreated by noted Staunton authority Frank Camaratta and first offered by The House of Staunton in 2002.  This is set #002! Crafted from 20,000-year old natural and polished Woolly Mammoth tusk, the pieces capture the exquisite design and proportions of the original Staunton pattern Chessmen, registered by Nathaniel Cooke and produced by Jaques of London in 1849.  The dark army is left unstained, showing the beautiful, natural occurring light and dark patination.  A full Club-sized Chess set, it features a 4.4″ King with a 2.0″ diameter base. Mammoth tusk is a naturally dense material that does not require additional weighting. The Chess pieces are hand carved, dated and signed by crafted by renowned Mammoth artist Oleg Raikis and master carver Igor Astafiev. All 34 Mammoth Staunton Chessmen are crafted from the highest grade of Mammoth tusk. The dark army has been stained the perfect shade of matte black. The chess pieces do not have base pads, but rather are left uncovered as has been the praxis for chessmen of this type over the centuries.

The chessmen are housed in a luxurious, compartmented, gold-tooled, black leather casket especially designed by Frank Camaratta to protect these heirloom quality masterpieces. The interior is lined in tan suede leather with two matching pillows included to further cushion and protect these irreplaceable . The upper tray is removable.

The Mammoth Staunton Chessmen consist of 34 pieces, including four Queens, an innovation introduced by Frank Camaratta in 1993 which has now become a World-wide standard praxis. The chess pieces and casket are like new. The chess pieces play and display best of a chessboard with 2-1/2″ squares. A fine selection of suitable chessboards can be found on this site at https://chessantiques.com/product-category/chessboards/.

Oleg Raikis has a strong affinity with chess, having been an ambitious tournament player in his youth. His love for the game is now an inspiration for his art. Aside from his sculptures, Oleg has designed and created many chess sets. They combine the creative imaginative skill of a master craftsman with the understanding of the practical requirements needed for a set of chessmen to be acceptable as an efficient tool for an ancient Royal game.  Oleg Raikis’ impressive sculptures, carved from hard woods and mammoth ivory, were displayed in the international exhibition, ‘Sculptor 1991’. Since then his work has been constantly on show, including exhibiting in Galleries in Germany, Britain and the States.