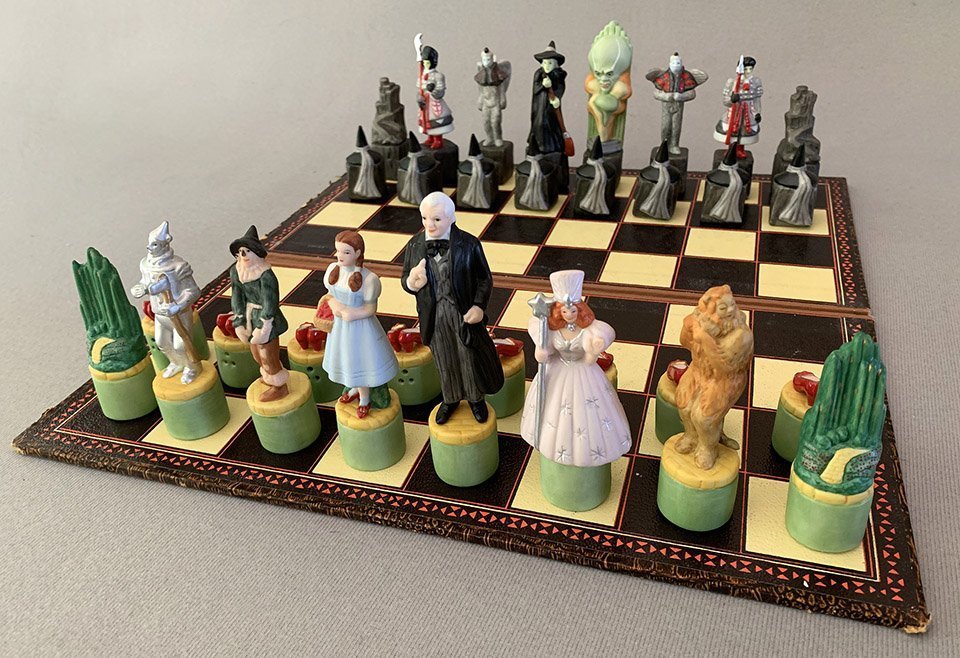 This offering is a very rare set of hand-painted porcelain Wizard of Oz Chess pieces, produced by Star Jars in 1995. Planned as a limited edition of 300 sets, serious production problems with the chessboard lid and base limited the actual production and only 54 full sets were actually sold to the public before production was terminated. There are a few Star Jar Wizard of Oz Chess Sets out there that are numbered in the 200’s, but the majority of the lower numbered ones didn’t make it out of the factory. Included are all of the original hand-painted porcelain characters which are actually Salt and Pepper Shakers. The King stands 4-3/8″ tall with a 1″ square base. Each piece has a sticker on the bottom plug that reads: Star Jars Inc. (c) 1995 Turner Entertainment.

There is no cookie jar (a porcelain storage box with a chessboard imprinted on the lid shown on the right) since very few ever made it out of the factory undamaged. There are none of the original 15 storage boxes. This set is in excellent condition with no damage This rare find is an absolute must have for the serious Wizard Of Oz Collector!

Star Jar cookie jars are a limited edition production of top quality numbered cookie jars. The company was founded in 1993 by Peter Gemmi. Peter came from the Fine Arts Industry, bringing with him a wealth of knowledge by utilizing his expertise in collectibles. He produced ” upscale ” limited edition numbered cookie jars. In addition to the limited edition numbered cookie jars, Star Jars also created salt & pepper shakers, which were miniatures of the cookie jars. Peter realized that the major Hollywood Studios were apt to give licenses to companies that could create and enhance their licensed characters. His vision was to create a product that would utilize his Art Gallery background. In 1993, before Gemmi had chosen a name for the company, he decided that having the license to Star Wars characters from Lucas Films would be pivotal for launching the new company. As a result, Peter choose Star Jars in order to impress Lucas Films and launched the Wizard of Oz chess set. Star Jars first success came via Turner Entertainment, holders of the license for the Wizard of Oz. Treasure Craft was chosen to manufacture the eleven piece series, which quickly became the industry standard for excellence. In 1995, the Tin Man was the first jar to be distributed.

Unfortunately, although the initial attempt to win the license from Lucas failed, Star Jars was ultimately given rights to other popular themes, such as Star Trek and Star Wars. Some of these themed jars are shown on page 246 thru 255 of Roerig’s Collectors Encyclopedia of Cookie Jars, Book III.  In 1996 Star Jars produced 5 different Star Trek cookie jars, which have become treasured by die-hard Trekies. Star Jars is no longer in existence. The company was out of business by 2000.